To create a bar chart:
• Define a matrix of values to display, Mathcad will use the rows and column numbers of the matrix as x- and y-axes, The matrix elements will be shown as columns extending from the xy plane to the appropriate height.
• Choose Graphy 3D Bar Chart from the Insert menu, Mathcad shows a box with a single placeholder, as shown below: 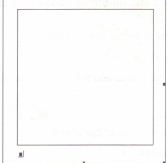 • Type the name of the matrix in the placeholder. Just as with an equation, Mathcad will not display anything until you click outside the plot region. What you see is a visual representation of the matrix. Mathcad draws a perspective view of the matrix as a two-dimensional grid lying flat in three-dimensional space. Each matrix element is represented as a column extending above or below this grid by an amount proportional to the value of the matrix element. In the default perspective, the first row of the matrix extends from the back left comer of the grid to the right, while the first column extends from the back left comer out toward the viewer.

The perspective on the bar chart depends on the location of the viewer with.respect to the surface. You can specify this view by changing the chart’s tilt or rotation, as described in “Changing your view of the 3D bar chart”.

Displaying a function of two variables

• Define xi and Yj as evenly as evenly spaced points on the x- and y-axes.
• Fill the matrix M with the values off( xi’ Yj ).
• Choose Graph=>3D Bar Chart from the Format menu.
• Type M in the placeholder. Then click outside the plot region 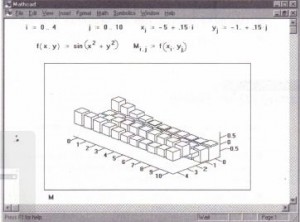 3D bar chart of a function of two variables.