• The minus sign appears in the exponent of the transform instead of in its inverse. The functions FFT, IFFT, CFFT, and ICFFT are used in exactly the same way as the functions discussed in the previous section

Mathcad includes three functions shown in Figure 13-4 for sorting arrays and one for reversing the order of their elements:

The above sorting functions accept matrices and vectors with complex elements. However in sorting them, Mathcad ignores the imaginary part

Unless you change the value of ORIGIN, matrices are numbered starting with row zero and column zero. If you forget this, it’s easy to make the error of sorting a matrix on the wrong row or column by specifying an incorrect n argument for rsort and csort. To sort on the first column of a matrix, for example, you must use csort(A, 0) 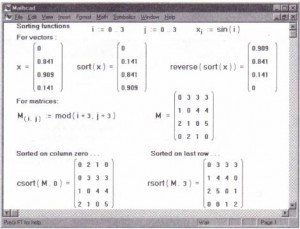