Mathcad comes with a predefined constant called FRAME whose sole purpose is to drive animations. The steps in creating any animation are as follows:
• Create an expression or plot whose appearance ultimately depends on the value of FRAME as shown in Figure 27-1. This expression need not be a graph as shown. It can be anything at all.
• Choose Animate from the View menu to bring up the following dialog

• Select the portion of your worksheet you want to animate.
• Irsthe dialog box, set the upper and lower limits for FRAME. The FRAME variable will increment by one as it proceeds from the lower limit to the upper limit.
• In the Frames/Sec. text box, enter the playback speed.
• Click the “Animate” button in the dialog box. You’ll see a miniature rendition of your selection inside the dialog box as shown in Figure 27-3. Mathcadredraws this once for each value of FRAME. This won’t necessarily match the playback speed since at this point, you’re just creating the animation, you’re not yet playing it back. At this point, an animation has been created. You can now do one of two things with it:
• You can save it as a Windows AVI file for use by other Windows applications.
• You can play it back immediately.
To save your animation clip as a Windows AVI file, click the Save As button in the dialog box. You’ll see the usual Save As dialog box. Since animation clips tend to take considerable disk space, Mathcad saves them in compressed format. Before creating the animation, you may want to choose what compression method to use or whether to compress at all. To do so, click on the Options button. To play the animation sequence back, follow the instructions in the next section 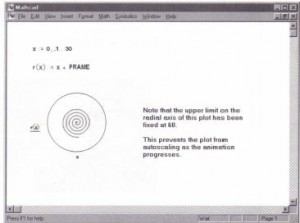 An expression suitable for animation. Note the dependence

The region to be animated has been selected.

The animation clip has been created and is ready for playback.