You may already have encountered the styles used for determining the appearance of Mathcad text regions, as described in Chapter 5, “Text.” By making changes to text styles rather than to individual text regions, you can make sweeping and strikingly uniform changes in the way a worksheet looks. You can get this same kind of leverage in the display of equations by math styles. For example, many math books show vectors in a bold, underlined font and matrices in a bold font. If you want to use this convention, do the following:
• Choose Equation from the Format menu.
• Click the down arrow beside the name of the current math styles to see a drop-down list of available math styles.
• Click on an unused math style name like “User 1” to select it.
• The name “User 1” should now appear in the “New Style Name” text box. Click in this text box and change the name to something like “Vectors.”
• Click on “Modify” to change this style to a bold, underlined font. This creates a math style called “Vectors” with the desired appearance. Proceed in a similar way to create a math style named “Matrices” having a bold font. When you’re done defining both styles, click “OK.” Now rather than individually changing the font, font size, and font style for names of 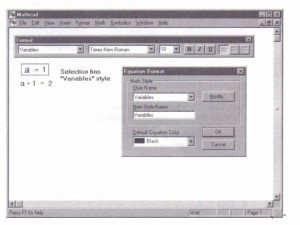 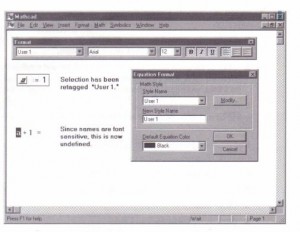 Figure 6-4: A different math style has been applied to the first variable name
in Figure 6-3. Note change infant.

vectors and matrices, you can simply change their math styles. To do so, do the following:
• Click on the name of the vector or matrix. The style assigned to that name appears on the Format Bar. By default, this is “Variables.”
• Click on the arrow beside the Format Bar window and scroll down to the math style “Vectors”. The style changes to “Vectors” and the appearance of the name changes to a bold, underlined font because that’s the font assigned to the Vectors style. Repeat the previous two steps for all vectors in the worksheet. For matrices, choose the newly created style “Matrices” instead. Note that you can apply a style to only one name at a time.

Once you’ve completed a set of math styles that you like, you need not repeat the process for other worksheets. You can save math style information by saving a worksheet as a template. To apply math style information to another worksheet, open your template from the File menu and copy the contents of the worksheet to the template. For more information about worksheet templates, see Chapter 4, “Worksheet Management.” If after having done this you decide to remove all the underlines from the vectors, you can simply:
• Choose Equation from the Format menu.
• Choose “Vectors” from the drop-down list of styles at the top of the dialog box.
• Click “Modify.”
• Click on the Underline check box. Once you click on the “OK” button, the underlines will be removed from every vector in the worksheet. Note that this procedure changes the appearance of the names of vectors and matrices, not the individual vector or matrix elements themselves. The individual elements continue to have the “Variables” or “Constants” math style by default.

All names, whether function names or variable names, are font sensitive. This means that x and x refer to different variables, and f(x) and fix) refer to different functions. In deciding whether two variable names are the same, Mathcad actually checks math styles rather than fonts. To avoid having distinct variables that look identical, don’t create a math style with exactly the same font, size and style as another math style.

Posted on November 21, 2015 in Equation and Result Formatting