This chapter lists and describes many of Mathcad’s built-in functions. Functions associated with Mathcad’s statistical and data analysis features are described in Chapter 14, “Statistical Functions.” Functions used for working with vectors are described in Chapter 10, “Vectors and Matrices.” And for functions to solve differential equations, see Chapter 16, “Solving Differential Equations.”

The following sections make up this chapter:

Inserting built-in functions
Using the Insert Function dialog box to see all available functions and get help on what they do.

String functions
Functions for manipulating strings, converting strings to and from numbers and vectors, and creating customized error messages.

This is the core set of functions that come with Mathcad. These functions are all documented here and in other chapters of this User’s Guide.

Built-in functions you write yourself

If you have Mathcad Professional and a supported 32-bit C compiler, you can write .” your own built-in functions. For details see Appendix C, “Creating a User DLL.

• Click in a blank area of your document or on a placeholder.
• Choose Function from the Insert menu. Mathcad opens the Insert Function dialog box shown on the following page.
• Double-click on the function you want to insert from the left-hand scrolling list, or click the “Insert” button.
• Close the dialog box if you no longer need it by clicking the “Cancel” button. 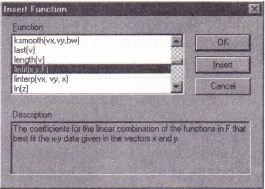 The scrolling list at the top of the Insert Function dialog box shows all of Mathcad’s built-in functions along with their arguments. The box below gives a brief description of the currently selected function.

To apply a function to an expression you have already entered, place the expression between the two editing lines and follow the steps given on the preceding page.

If you want to apply one of these functions to every element of a vector or matrix, use the vectorize operator as described in the section “Doing calculations in parallel” in

Note that all of these trig functions expect their arguments in radians. To pass degrees, use the built-in unit deg. For example, to evaluate the sine of 45 degrees, type sin (45*deg).

Keep in mind that because of round-off errors inherent in a computer, Mathcad may return a very large number where you would ordinarily expect a singularity. In general, you should be cautious whenever you encounter any such singularity. 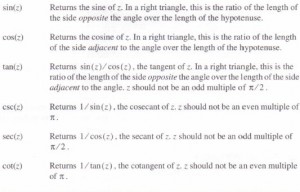 The inverse trigonometric functions below all return an angle in radians between 0 and 2 . n . To convert this result into degrees, you can either divide the result by the builtin unit deg or type deg in the units placeholder as described in the section “Displaying units of results”

Because of round off error inherent in computers, you may find that and of a very large number returns .As a general rule, it’s best to avoid numerical computations near such singularities

The hyperbolic functions sinh and cosh are given by: 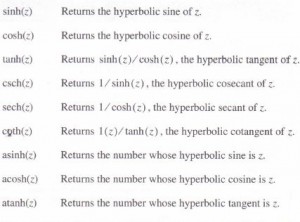 In general, a complex argument to the natural log function returns:

This is called the principal branch of the natural log function. Figure 13-1 illustrates some of the basic properties of log functions. 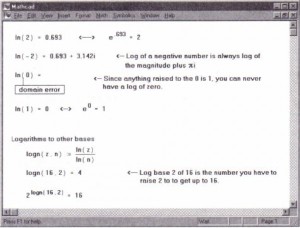 These functions typically arise as solutions to the wave equation subject to cylindrical boundary conditions.

Bessel functions of the first kind and second kind, J n(x) and Yn(x) , are solutions to the following differential equation: 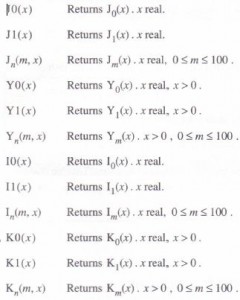 The following functions arise in a wide variety of problems

Returns the value of the Euler gamma function at z. For real z, the values of this function coincide with the following integral