When you start Mathcad the SI system of units is automatically loaded by default. This means that when you use the equal sign to display a result having units Mathcad automatically displays the units in the result in terms of some combination of the SI base units: meter, kilogram, second, ampere Kelvin candela, and mole. You can of course convert this combination of base units into a different unit by typing that unit into the units placeholder, as discussed in “Displaying units of results” on page 171. However, until you do so, Mathcad uses the fundamental units of the SI unit system to display your result.

You can have Mathcad display results in terms of the fundamental units of any of the other built-in unit systems in Mathcad: CGS, US customary, MKS, or no unit system at all. To do so, choose Options from the Math menu and click on the Unit System tab. You will see a dialog box like the one shown below: 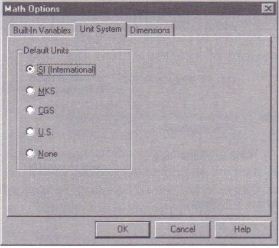 none Displays results in terms of fundamental dimensions of length, mass, time, charge, and absolute temperature. All built-in units are disabled

The SI unit system, widely used by scientists and engineers in many countries, is the preferred unit system in Mathcad and the one available to you by default in new Mathcad worksheets. SI provides two additional base units over the other systems, one for luminosity (candela) and one for substance (mole), and the base SI electrical unit (ampere) differs from the base electrical unit in the other systems (coulomb).

The standard SI unit names-such as A for ampere, L for liter, s for second, and S for siemens-are generally available only in the SI unit system. Many other unit names are available in all the available systems of units. For example, when CGS is selected, you’ll still be able to use kg and lb even though these are not, strictly speaking, part of the CGS system of units. For a listing of which units are available in each system, see Appendix B, “Unit Tables.” Mathcad includes most units common to scientific and engineering practice. Where conventional unit prefixes such as m- for milli-, n- for nano-, etc. are not understood by Mathcad, you can easily define custom units such as /lm as described in “Defining your own units” on page 170. For examples of units with prefixes not already built into Mathcad, see the QuickSheets in the Resource Center

If you click “None” in the Unit System tab of the Math Options dialog box, there will be no built-in units at all. You can, however, still define and use your own units. To do so, you use the special built-in constants: lL, 1M, IT, lQ, and lK. These represent the \ dimensions length, mass, time, charge, and absolute temperature; you may also use the constants 1U and IS for luminosity and substance. When you click “None,” Mathcad displays answers in terms of the fundamental dimensions of length, mass, time, charge, and temperature rather than in terms of any system of units. Figure 9-6 shows how to define units using these built-in constants and how to carry out the analysis in Figure 9-1 after having done so. Notice that if you type the expression kg: 1M in your worksheet Mathcad will display kg := 1 M, treating the multiplication as implied on the right-hand side; so you will need to backspace over the implied multiplication to delete it to create the constant 1M. 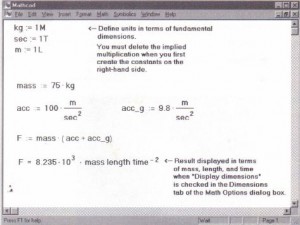 Even if you are working in one of Mathcad’s built-in unit systems, you can always choose to see results in your worksheet displayed in terms of fundamental dimensions like mass and length rather than the base units of the unit system. To do so:

This may be useful if the nature of your work makes another set of fundamental dimensions more appropriate. Thus, a commodities trader may prefer to use bushels and currency rather than charge and temperature; a car salesman might define trucks and sedans rather than length and mass. In short, a dimension is nothing more than a way of tagging numbers so you can keep better track of them. It just so happens that in most physical problems, it’s convenient to name these dimensions according to the fundamental dimensions in the SI unit system.

To change the names of the dimensions:

• Choose Options from the Math menu.
• Click on the Dimensions tab, as shown below: 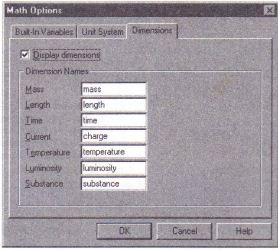 • Click on the check box beside “Display dimensions” if it is not already checked.
• To change a dimension name, edit the name shown in the appropriate text box.
• Click “OK.”