Changing the color and layout of the bars MathCad Help

You can often make a 3D bar chart communicate more effectively by using different colors. In addition, you can switch among several layouts of the bars to show your data most effectively. Use the Color & Lines page of the 3D Plot Format dialog box. 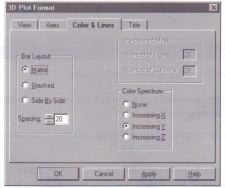 The same bar chart using each of the Color Spectrum options. 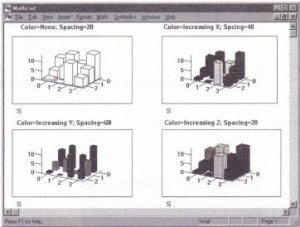 The Axes page of the 3D Plot Format dialog box lets you modify the format of the axes of your plot. Each axis is described by its own set of check boxes and text boxes. 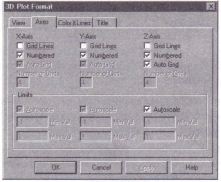 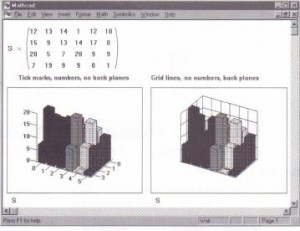 By default, Mathcad auto scales the z-axis according to the range of values in the matrix you are plotting. Sometimes you will want to fix the scaling yourself, for example, if you are comparing views of related data or setting up a surface animation sequence. To set the z-axis limits manually, click on the Autoscale box in the z-axis column of the Axes page to uncheck it. Then enter the maximum and minimum values in the Max. Val. and Min. Val. text boxes.