Changing your view of the surface plot MathCad Help

The View page of the 3D Plot Format dialog box lets you modify the general presentation of your plot.
To change your plot from a surface plot to another type of 3D plot, click on the appropriate button in the Display As group. You can convert any surface plot (except for parametric plots) into a contour plot or a 3D bar chart. These plot types are fully discussed in the corresponding chapters of this User’s Guide. You can also display just the points making up the surface without displaying the surface itself. To do so, click .on Data Points. You can change how the points look by using the Colors and Lines tab of this dialog box. 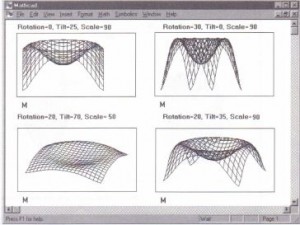 Different views of a surface.

To control how bumpy the plot looks, adjust the magnification of the vertical scale by changing the number in the Vert. Scale text box. This is an integer between 1 and 100. Wheh the vertical scale is small, the variations in height of the surface will be barely perceptible. At 100, the variations are shown at full scale. Figure 22-3 shows the effects of varying the scale (as well as the rotation and tilt) of a surface plot. To add or remove a border around the surface plot region, click on Show Border in the Frames group to add or remove a check. The border is a two-dimensional frame around the surface plot region.

Using a border or a bounding box on a surface plot.

Changing the shading of the surface 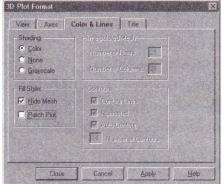 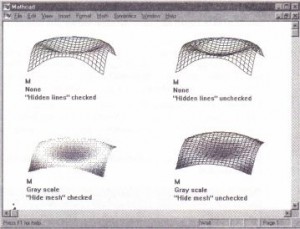 If you uncheck Hidden Lines, the surface shows lines that are behind it. Such a plot will draw more quickly than iflines were hidden, but it may be more difficult to interpret. The upper two surface plots in Figure 22-5 show the same surface with and without
lines showing. By default, Mathcad overlays a mesh on colored and grayscale surfaces. The intersections of the lines making up this mesh correspond to the elements of the underlying matrix. Each patch created by this mesh gets a color corresponding to the value of the under! ying matrix element.
As the number of matrix elements increases, this mesh can become so dense that it begins to obscure the colors. When this happens you may want to hide the mesh. To do so, click Hide Mesh in the Fill Style group to add a check. Note that Hide Mesh is only available for colored and grayscale plots. Hiding the mesh of a plot that doesn’t have any shading would make that plot invisible. The lower two surface plots in Figure 22-5 show the same surface plot with the mesh showing and with it hidden.

By default, the patches making up the surface are free to tilt in whatever direction necessary to connect them to their neighboring patches. The result is a continuous surface. In this case, each point at which grid lines intersect is associated with a matrix element. This means that for an m x n matrix, there will be (m – 1)(n – 1) patches.

To constrain these patches to be horizontal, click Patch Plot in the Fill Style group for regular surface plots and Alternative Mesh for parametric surface plots to add a check. The resultant discontinuous surface shows a patch for each matrix element. This means that for an m x n matrix, there will be mn patches.

an example of the same matrix being plotted with Patch Plot checked and not checked. 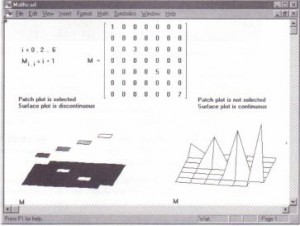 Mathcad generates grid lines for surface plots by extending tick marks up and down the two back planes adjacent to a given axis. Thus, x-axis grid lines represent lines of constant x drawn on the xz plane and the xy plane, the two orthogonal planes whose intersections form the x-axis. The y-axis grid lines and z-axis grid lines are defined similarly .

Note that this makes it impossible to draw lines of constant x on only the xz plane. Clicking Grid Lines always results in grid lines being drawn on two of the three back planes.

To choose between using tick marks or grid lines on a selected axis, use the Grid Lines check box for that axis. When Grid Lines is checked, Mathcad will extend the tick marks on the selected axis into grid lines on each adjacent back plane. For example, checking this on the z-axis will result in lines of constant z on both the yz and the xz back planes. If you are showing grid lines, you should seriously consider showing back planes as well. See “Changing your view of the surface plot” an example of a surface plot that uses grid lines rather than tick marks. 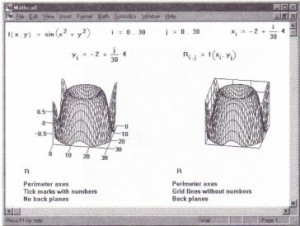 To add or remove numbers for the tick marks on an axis, use the Numbered check box for that axis. The differences between having numbers on the tick ~arks and not having numbers.

Finding information in an Electronic Book
Vectors and Matrices

Home > Surface Plots > Changing your view of the surface plot