Mathcad automatically displays results in terms of the fundamental units of the unit system you’re working with. Mathcad offers several choices of unit system: SI, CGS, MKS, D.S. customary units, or no unit system. If you’re using SI units, the default system in Mathcad, the base units are meter, kilogram, second, ampere, KeLvin, candeLa, and moLe. If you’re using the CGS system, for example, the base units are centimeter, gram, second, couLomb, and KeLvin. For details about the base units in MKS and U.S. customary units see Appendix B, “Unit Tables.”

You can have Mathcad redisplay a particular result in terms of any of Mathcad’s builtin units. To do so:

Another way to insert a unit is to type it directly into the units placeholder. This method is more general since it works not only for built-in units but for units you’ve defined yourself and for combinations of units.

For example, in Figure 9-1, F is displayed in terms of the fundamental units kg, m and s. To change this to dyne:

• In the units placeholder, type dyne.

There are two ways to convert from one set of units to another:

• By using the Insert Unit dialog box, or
• By typing the new units in the units placeholder itself

If you want to display the result in terms of one of Mathcad’s built-in units, the simplest method is to use the Insert Unit dialog box:

As a quick shortcut, or if you want to display the result in terms of something not available through the Insert Unit dialog box-for example, a unit you defined yourself or an algebraic combination of units-you can edit the units placeholder directly. For example, to express the result in the previous example in terms of force-pounds rather than dynes:

Click in the name of the unit you want to replace.

• Delete the unit name by drag-selecting it and pressing [Del].

Figure 9-4 shows F displayed both in terms of its fundamental SI units and in terms of several combinations of units.

When you enter an inappropriate unit in the units placeholder, Mathcad will display whatever combination of base units that make the result have the right units. For example, in the last equation in Figure 9-4, you see that k W . s is not a unit of force. Mathcad therefore inserts m-l to cancel the extra length dimension. 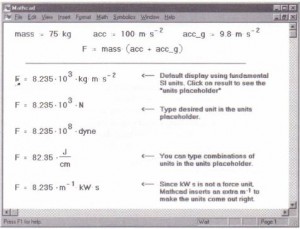 Conversions involving an offset in addition to a multiplication, for example gauge pressure to absolute pressure, cannot be performed directly with Mathcad’s unit conversion mechanism.

In particular, when working with temperature, keep in mind that you cannot use Mathcad’s unit conversions to convert between Fahrenheit and Centigrade. You can, however, perform conversions of this type by defining suitable functions. See Chapter 7, “Equations and Computation,” for more on defining your own functions

For example, you can use the units placeholder to display a result as a multiple of . To do so:

You can also use the units placeholder for dimensionless units like degrees and radians. Mathcad treats the unit rad as a constant equal to I, so if you have a number or an expression in radians, you can type deg into the units placeholder to convert the result from radians to degrees. To convert an expression in degrees to radians, simply press the equal sign to evaluate it; Mathcad displays the results by default in radians. You may insert the unit name rad in the units placeholder if you wish. Figure 9-5 shows some examples of these techniques of converting and scaling results involving degrees
and radians. 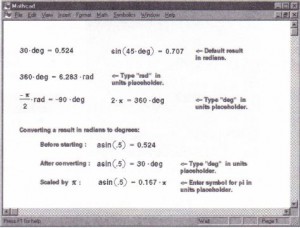