Mathcad’s Find and Replace commands work in both text and equations. When you search for a sequence of characters, Mathcad looks for that sequence as part of a variable or function name or as a piece of text in a text region.

To find a sequence of characters,
• Choose Find from the Edit menu. Mathcad brings up the dialog box shown below Enter the sequence of characters you want to find in the text box labeled “Find”.
• Click on “Next” or “Previous” to find the occurrence of the character sequence immediately after or before the current insertion point location. For example, to search for all occurrences of the letters Ib in a worksheet:
• Choose Find from the Edit menu. Mathcad brings up a dialog box and prompts you for a string to find.
• Type Ib and click on “Next”. Mathcad searches forward from the insertion point position for a region containing the letters lb, whether in text or in an equation. When Mathcad finds a match in a text region, it shows it in reverse video; when it finds a match in an equation it positions the insertion point in the string. The dialog box remains up so that you can continue searching. When you’re done with the search, close the Find dialog box by clicking “Cancel.” Note that Mathcad’s Find command is case-sensitive, but not font-sensitive. For example, if you’re searching for b, you won’t find B, but you will find p, since this is nothing more than a lowercase b in Greek or Symbol font. 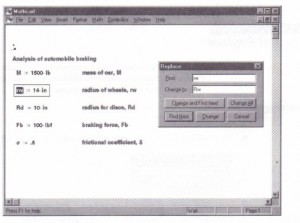