You can reformat your graph’s axes, using the X-Y Axes page of the Formatting Currently Selected X-Y Plot dialog box.

To change a graph’s format:

The rest of this section describes the settings on the X-Y Axes page of the dialog box for formatting X-Y Plots. It then provides detailed discussions about options for setting axis limits and for adding horizontal and vertical reference lines to your graph.

Each axis has the following settings associated with it:

When this box is checked, the selected axis is logarithmic and the axis limits must be positive. The bottom-right-hand graph in Figure 20-16 on page 489 illustrates a graph with a logarithmic axis

When this box is checked, the tick marks on the selected axis are replaced by grid lines. The top-right-hand graph in Figure 20-16 on page 489 illustrates a graph that uses grid lines rather than tick marks.

When this box is checked, the tick marks on the selected axis are numbered

See the section “Setting default formats” on page 479 to learn how to:

• Quickly restore the graph to its default format settings.
• Use a particular graph as a model for all future graphs.

Mathcad provides the following ways to set limits for axes:

By default, a plot you create in Mathcad is autoscaled. With Autoscale on, Mathcad automatically sets each axis limit to the first major tick mark beyond the end of the data. This will be a reasonably round number large enough to display every point being
graphed. With Autoscale off, Mathcad automatically sets the axis limits exactly at the data limits. 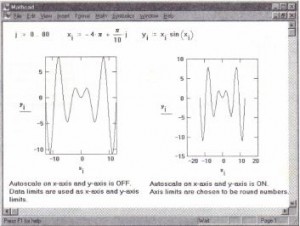 The effects of having Autoscale turned on and off

To turn Autoscale off and have the axis limits automatically coincide with the end of the data:

• Click on the graph to select it and then choose Graph-e X.Y Plot from the Format menu. Mathcad displays the dialog box for formatting X-Y graphs, shown on page 472. Click the X-Y Axes tab if the X-Y Axes page is not displayed. (You can also double-click on the axis itself to see a similar dialog box.)

• Click on Autoscale for the appropriate axis to remove the check and to toggle Autoscale off.

You may want to use axis limits other than those set by Mathcad. You can override Mathcad’s automatic limits by entering limits directly on the graph. To do so:

• Click the graph to select it. Mathcad displays four additional numbers, one by each axis limit. These numbers are enclosed within corner symbols, as illustrated in the selected plot in Figure 20-11.
• To set the axis limit on the horizontal axis, click on the number underneath the appropriate x-axis limit and type the number at which you want the axis to end. To set an axis limit for the vertical axis, do the same thing to the number to the left of the appropriate y-axis limit.
• Click outside the graph. Mathcad redraws it using the axis limits you specified. The corner symbols below the limits you changed will disappear. Figure 20-11 shows the effect of manually setting limits on a graph. 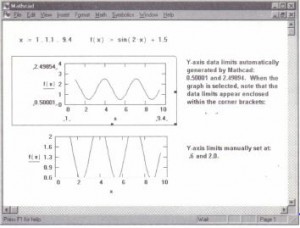 Mathcad places linearly or logarithmically spaced tick marks or grid lines on a graph. The spaces between these markings are relatively round numbers that span the range of values on each axis. There may, however, be occasions when you need to place a line somewhere other than where Mathcad would normally place a grid line

To add a horizontal or vertical line to a plot:

When you click outside the graph, Mathcad draws a dashed line at each number you specify. The number you type appears at the end of the line. To move the dashed line click on the number in the placeholder and change it. To delete the line, delete this number or click on Show Markers for the appropriate axis to uncheck it

By using the Show Markers function, you can add to each axis one or two dashed lines stretching across the plot. When you need to place more than two lines or you need more control over the appearance of a line, you can add lines by plotting a constant expression

• To create a vertical reference line, reverse the roles of the x- and y-axes. Place a range variable on the middle placeholder of the y-axis and the constant expression on the x-axis 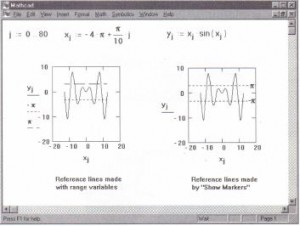