Mathcad graphs are both versatile and easy to use. To create a graph, click where you want to insert the graph, choose Graph-e-X. Y Plot from the Insert menu, and fill in the placeholders. You can modify the format extensively, including reformatting the axes and curves and using a variety of different types of labels

The following sections describe the use of Mathcad graphs:

Creating a graph
Basic steps in creating and editing a graph. QuickPlots versus graphs where you explicitly specify the range of values over which to plot.

Graphing more than one expression
Procedures for creating graphs with multiple traces.

Formatting the axes
Procedures for modifying the formats of the x- and y-axes.

Formatting individual curves
Procedures for modifying the formats of curves or traces in a graph.

Labeling your graph
Procedures for working with titles, axis labels, and other labels.

Modifying your graph’s perspective
Procedures for changing the size of the graph, zooming in on a portion of the graph, and finding coordinates in it.

You create X-Y graphs in Mathcad using theX-Yplotoperator. The -Ypkx operazor like other Mathcad operators, has placeholders for you to fill in that pecify expeessions to be computed and displayed.

You can insert the X-Y plot operator into your worksheet in one of three way : aaeoegn these methods are equivalent, only the first is mentioned in the rest of this . in your worksheet where you want your graph to appear and either

• Choose Graph~X-Y Plot from the Insert menu; or
• Press the @ key; or
• Click on the X-Y Plot button in the Graph Palette.

The X-Y plot operator is very flexible, letting you either

This section outlines the difference between these two uses of the X-Y plot operator. The sections “Graphing functions” on page 464, “Graphing a vector” on page 465, and “Graphing more than one expression” on page 470 describe the kinds of expressions you can plot in greater detail. See “Formatting the axes” on page 472 and “Formatting individual curves” on page 478 for an introduction to Mathcad’s plot formatting options.

You can quickly and easily create X-Y graph from a single Mathcad expression. To do so:

To see the graph fill in the placeholders

Just as with an equation, Mathcad does not process a graph until you click outside the graph region. When Mathcad processes the graph, it draws one point for each value of each range variable in the x or Y axis expressions and, unless you specify otherwise, connects them with straight lines

Figure 20-1 shows some typical graphs with the placeholders filled in. Note the line that appears under the y-axis arguments. This indicates the trace type and color used to display the curve. See the section “Formatting individual curves” on page 478 to learn how to control this.

The graph in the upper left comer of Figure 20-1 is an example of a parametric plot: one in which the expressions you are plotting on the x-axis and y-axis are both functions of a ingle variable. If you do not explicitly define a range variable for the parameter in such a plot, Mathcad uses a default range for this variable to create the graph. 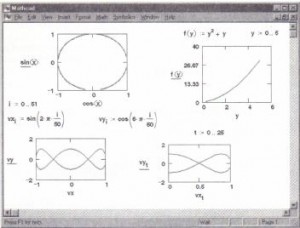 If an expression is complex, Mathcad graphs only the real part. The imaginary part is ignored. Note that no error message will be displayed.

You can drag, cut, copy, and paste a graph just as you would any other math region. See  “Editing Equations,” for details

• Press and hold down the mouse button just outside the plot.
• With the button still pressed, drag the mouse cursor so as to enclose the graphics region in a selection rectangle.
• Choose Cut from the Edit menu.

To move a graph, follow the instructions above for deleting it. Then click the mouse wherever you want the graph and choose Paste from the Edit menu. Alternatively, you can drag a plot as you would an equation.