To type a Greek letter in a text region use one of these two methods:
• Open the Greek Symbol Palette by clicking on the button labeled a~ on the Math Palette, then click on the appropriate button on the palette.
• Type the roman equivalent of the Greek letter and immediately press [Ctrl]G.

The Greek Symbol Palette, shown below, provides a convenient way to insert a Greek

symbol into your text. Just place the insertion point in a text region and click on the button in the palette. You can also use the Greek Symbol Palette to insert Greek letters into math expressions. 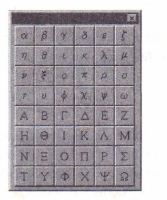 Once you’ve learned your way around Mathcad, however, you may find the [Ctrl]G keyboard shortcut method is faster. For example, to type the Greek symbol <I> in a text region, follow these steps: 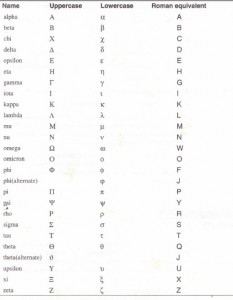 To change a text selection into its Greek equivalent, select the text and then:

• Choose Text from the Format menu .

• Click in a text region to place the insertion point (a vertical bar).
• Drag to highlight the text you want to export if you do not want to export the entire text region.
• Choose Copy from the Edit menu.
• Click in the target application’s window and paste from the clipboard. You can also import text from most other Windows applications. To do so:
• Place the text in the clipboard.
• Click in an empty region of the Mathcad worksheet. You should see the crosshatch.
• Choose Paste from Mathcad’s Edit menu. Mathcad creates a text region containing the text on the clipboard. If the text contains RTF formatting codes, Mathcad formats the text as directed. Notice that Mathcad treats the imported text as a single text region, even if several separate paragraphs were selected in the original application. You can also save the entire worksheet, including equations and plots, in RTF format, or choose to import text into Mathcad as an OLE object so that it can continue to be edited in its original application. For more information see Chapter 4, “Worksheet Management.”