Returns a vector representing the frequencies with which values in A fall in the intervals represented by the int vector. The elements in both int and A must be real. In addition, the elements of int must b~ in ascending order. The resulting vector is one element shorter than int.

Mathcad interprets int as a set of points defining a sequence of intervals in a histogram. The values in int must should be in ascending order. The result of this function is a vector f, in which Ii is the number of values in A satisfying the condition:

Mathcad ignores data points less than the first value in int or greater than the last value in int. Figure 14-2 shows how to use histograms in Mathcad. 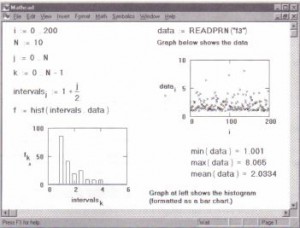 To change the seed value, choose Options from the Math menu and change the value of “seed” on the Built-In Variables tab. Be sure to supply an integer. 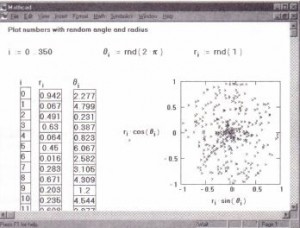 If you want to check a test case several times with the same random numbers, reset the random number generator between calculations as described above.