This section describes how to create text regions in Mathcad. Text regions are useful for inserting any kind of text into your worksheets and templates: comments around the equations and plots in your worksheet, blocks of explanatory text, background information, instructions for the use of the worksheet, and so on. There is no limit on the size of text regions. Mathcad ignores text when it performs calculations, but you can insert working math equations into text regions as described in “Equations in text” on page 100

To create a text region, follow these steps:
• Click in blank space to position the crosshair where you want the text region to begin. Then choose Text Region from the Insert menu, or press the double quote (” ) key. Mathcad begins a text region. The cross hair changes into an insertion point and a text box appears.
• Now begin typing some text. Mathcad displays the text and surrounds it with a text box. As you type, the insertion point moves and the text box grows. .A
• When you’ve finished typing the text, click outside the text region. The text box disappears. You cannot leave a text region by pressing [.J]. You must leave the text region by: Fluid flow example +
• Clicking outside the region, or
• By repeatedly pressing one of the arrow keys until the cursor leaves the region. Figure 5-1 on the next page shows a Mathcad worksheet containing several text regions
followed by an equation. 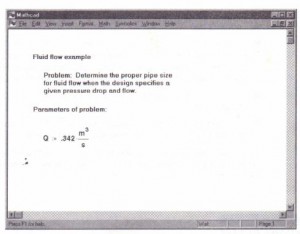 Figure 5-1: Text regions above an equation in a Mathcad worksheet.

Changing the width of a text region

When you start typing in a text region, the region grows as you type, wrapping only when you reach the right margin or page boundary. (The location of the right margin is determined by the settings in the Page Setup dialog box, which you can modify by choosing Page Setup from the File menu.) Press [.J) whenever you want to start a new line. Often you would like to set a width for your whole text region, and have lines wrap to stay within that width as you type. To do this: • Type normally until the first line reaches the width you want. • Type a space and press [Ctrl]
All other lines will break to stay within this width. When you add to or edit the Math cad wraps the text according to the width set by the line at the end of which you pressed [Ctrl] To change the width of an existing text region, do the following:
• Drag-select the text region by clicking in the worksheet outside it and dragging the mouse pointer across the region and releasing it, or click anywhere in the text region. A selection box encloses the text region.
• Move the pointer to the middle of the right edge of the text region until it hovers over the “handle” on the selection rectangle. The pointer now changes to a double arrow. You can now change the size of the text region the same way you change the size of any window: by dragging the mouse

To move a single text region or group of regions, follow the same steps that you would with math regions:
• Click on an empty spot, hold the mouse button down, and drag the selection rectangle across the region or regions you want to select. When you release the mouse button, dashed outlines show which regions are selected or, if you have selected a single region, a selection box appears around the region.
• Now move the mouse pointer to the edge of a selected region so that its appearance changes to a hand.
• Hold down the mouse button and drag it to the desired spot. If you’ve selected more than one region, the selected regions will move as a group. You can also cut, paste, and copy text regions as you would any other regions. Select the-regions and then choose Cut, Paste, or Copy from the Edit menu. You can also use the corresponding buttons on the toolbar.