You can use Mathcad’s integral operator to numerically evaluate the definite integral of a function over some interval.

As an example, here’s how you would evaluate the definite integral of sin(x)2 from 0 to n/2 . Follow these steps:

• Click in a blank space and type &. An integral appears, with placeholders for the  integrand, the limits of integration, and the variable of integration.

Mathcad uses a numerical algorithm called Romberg integration to approximate the integral of an expression over an interval of real numbers.

There are some important things to remember about integration in Mathcad:

Like all numerical methods, Mathcad’s integration algorithm can have difficulty with ill-behaved integrands. If the expression to be integrated has singularities, discontinuities, or large and rapid fluctuations, Mathcad’s solution may be inaccurate.

In some cases, you may be able to find an exact numerical value for your integral by using Mathcad’s symbolic integration capability. You can also use this capability to evaluate indefinite integrals. See Chapter 17, “Symbolic Calculation.”

Although the result of an integration is a single number, you can always use an integral with a range variable to obtain results for many numbers at once. You might do this, for example, when you set up a variable limit of integration. Figure 12-7 shows how to do this. 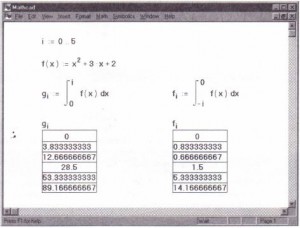 Keep in mind that calculations such as those shown in Figure 12-7 may require repeatedly evaluating an integral. This may take considerable time depending on the complexity of the integrals, the length of the interval, and the value of TOL (see below).

Changing the tolerance for integrals

Mathcad’s numerical integration algorithm makes successive estimates of the value of the integral and returns a value when the two most recent estimates differ by less than the value of the built-in variable TOL. Figure 12-8 shows how changing TOL affects the accuracy of integral calculations. To display many digits of precision 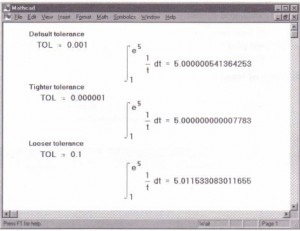 Effects of tolerance on integral calculations

You can use Mathcad to evaluate complex contour integrals. To do so, first parametrize the contour. Then integrate over the parameter. If the parameter is something other than arc length, you must also include the derivative of the parametrization as a correction factor. Figure 12-9 shows an example. Note that the imaginary unit i used in specifying the path must be typed as li. 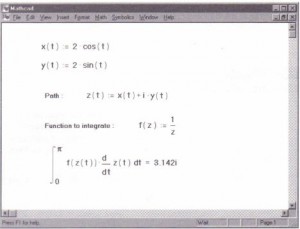 How to do a complex contour integral in Mathcad.

You can also use Mathcad to evaluate double or multiple integrals. To set up a double. integral, press & twice. Fill in the integrand, the limits, and the integrating variable for .A each integral. Figure 12-10 shows an example 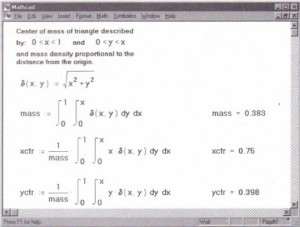