This section shows how to use range variables to perform iteration

Iteration over a range

For example, suppose you want to create a list of x and y values for points on the polar curve r = cos(8) + 1 . The basic idea is as follows:

The strategy for solving this problem is simple: create a range variable i and then compute e, r, x, and y for each value of i. The formula for ei defines e to run from 0 to 21t in steps of 21t/ N. To create the other formulas, just put the subscript i on each variable in the formula. Figure 11-6 shows the result. 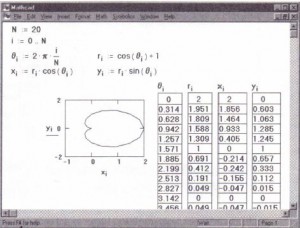 Notice that in this example i, not e, is defined as the range variable. Since i takes on only whole-number values, it is a valid subscript. On the other hand, e takes on fractional values. It therefore cannot be used as a subscript. In many cases, you can avoid this extra step by using functions instead of vectors. Figure 11-7 shows how to generate the cardioid shown in Figure 11-6 with functions instead of vectors. 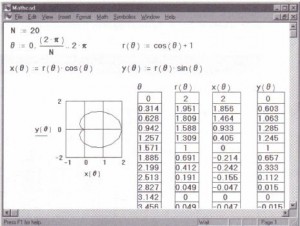 Using a function to do the same thing as shown in Figure 11-6.

By using vector notation and the vectorize operator, you can eliminate the use of a subscript in the last three equations in Figure 11-6. Figure 11-8 shows an example of how to do this 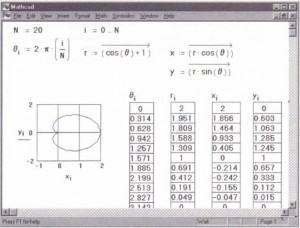 Using the vectorize operator to create a polar plot.

Equations that use vector notation instead of subscripts typically compute much more quickly. For more information, see Chapter 10, “Vectors and Matrices.”

If you use two range variables in an equation, Mathcad runs through each value of each range variable. This is useful for defining matrices. For example, to define a 5 x 5 matrix whose i,jth element is i +j , type these equations:

Note that you don’t need to type [Space] to leave the subscript in this case. Typing:leaves the subscript and creates the definition symbol

Figure 11-9 shows the result of typing the above equations. It is usually best to display the matrix in the form shown in Figure 11-9. If instead of typing x= you were to type x [i, j =, Mathcad would show one long output table with 25 numbers. Such a table is often difficult to interpret. A similar problem arises when you use a pair of range variables in a graph. 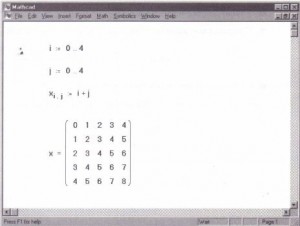 The Xi,j equation is evaluated for each value of each range variable, for a total of 25 evaluations. The result is the matrix shown at the bottom, with 5 rows and 5 columns.The element in the ith row andjth column of this matrix is i +j .