Mathcad has the following limits on the sizes of arrays to be defined, entered, or displayed:

you cannot use the Matrix command on the Insert menu to create an array having more than 100 elements. This limitation applies whether you attempt to create a new array or add to an existing array. You can however, create larger arrays by either using the augment or stack functions to join arrays together, by using range variables, or by reading the numbers in directly from a disk file. An example of how to use the augment function is shown in Figure 10-8. The use of range variables to create arrays is discussed in Chapter 11, “Range Variables.” Reading data files directly from a local or network drive, the clipboard, or another application is discussed in Chapter 19, “Data Management“

If an array has more than nine rows or columns, Mathcad automatically displays it as a scrolling output table. You can enlarge the table or use the scroll bars provided in order to view all of the array. If, however, you change the local result format such that Mathcad displays it as an array rather than as a scrolling output table, Mathcad displays only the first two hundred rows or columns. Mathcad uses an ellipsis to indicate that rows and columns are present but not displayed. Although Mathcad does not display these rows or columns, it does continue to keep track of them internally.

The effective array size limit depends on the memory available on your system. For most systems, it will usually be at least 1 million elements. In no system-will it be higher than 8 million elements. If you try to define an array larger than your system will accommodate you’ll see an error message indicating that you have insufficient and columns. When only limited memory is available and you define several very large arrays, the array size limit may decrease. 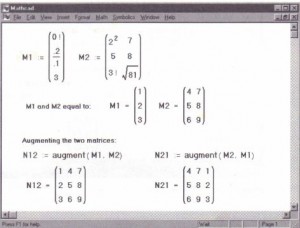