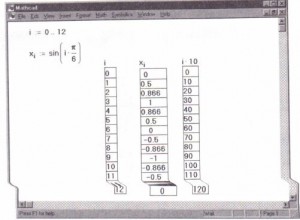 Typing after an expression with range variables gives an output table

To create the three tables in Figure 11-3, first define the range variable. Then type these equations:

Whenever you type an expression followed by “=” Mathcad displays:

Since both x= and x [i = display the same numbers, you can think of tables as another way of viewing the contents of a vector. Tables are particularly convenient for viewing selected parts of a vector. For example, if you’ve defined a vector v, you can view every other element of that vector by typing:

Here are some facts about output tables in Mathcad:

• To format the numbers in a table, click in the table and choose Number from the Format menu. Then specify your formatting preferences in the dialog box as you would for an equation with a single numeric result. For more information on number formatting, see Chapter 6, “Equation and Result Formatting.”

• You can’t use units with a table as you would with a single scalar answer. If the results in a table have dimensions, Mathcad shows dimensions on each value in the .” table. To avoid this, divide the ranged expression by the units. See Figure 11-4. 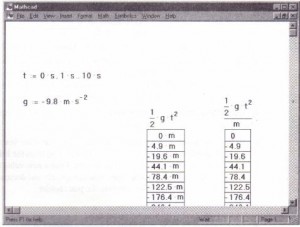 Units in a table.

Gallery of animations
Opening a worksheet