As soon as you’ve created an animation clip as described in the previous section, Mathcad brings up the following window:

Note that the first frame of the animation clip you just created is already in the window. To play back the animation clip, click on the arrow button at the lower left comer of the window. The arrow will turn into a square and the animation will begin to play. You can control the playback speed by clicking on the button to the right of the play button, which then displays the context menu shown below:

Choose Speed from the menu and adjust the slider control.

You can also play back the animation clip on a frame by frame basis, either forward or backward. To do so, drag the slider below the animated picture to the left or right. You can resize this window the way you would any window, by dragging a corner in the appropriate direction. Keep in mind, however, that the image in the window is a bitrnap and therefore subject to distortion when resized. You can minimize this distortion by keeping the aspect ratio (height to width) constant when you resize. To do this conveniently, click on the button to the right of the play button and choose View from the context menu.

If you have an existing Windows AVI file on your disk, you’ll be able to play it within Mathcad. To do so:
• Choose Playback from the View menu to bring up the following dialog box

The window is collapsed shut since no animation clip has been opened. To open one, click on the button to the right of the play button and choose Open from the menu. You’ll see an Open File dialog box which you can use to locate and open the Windows AVI file you want to play.

Once you’ve loaded a Windows AVI file, you can proceed as described in the previous section.

Launching an animation directly from your worksheet

Once you have created an animation, you may want to launch it directly from your worksheet without having to choose Playback from the View menu, as described above. You may also wish to embed it or link it directly to your worksheet so that it can be played “in place.” 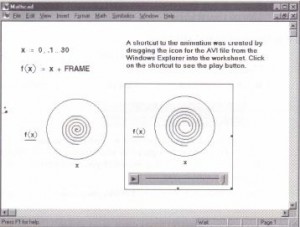 A Mathcad worksheet containing a shortcut to an animation.

Entering a table of numbers
Gallery of animations