The examples in previous sections have been chosen more for their simplicity than their power. This section shows some examples of more complicated programs capable of performing tasks that would be difficult if not impossible without the availability of these programming features.

Much of the flexibility inherent in programming arises from the ability to embed programming structures inside one another. In Mathcad, you can do this in three ways:

• You can make one of the statements in a program be another program.

• You can define a program elsewhere and call it from within another program as if it were a subroutine.

• You can define a function recursively.

The remainder of this section illustrates these techniques by example.

One way many programmers avoid overly complicated programs is to bury the complexity in a subroutine. Figure 18-13 shows how you can do something similar in Mathcad. By defining intsimp elsewhere and using it within adapt, the program used to define adapt becomes considerably simpler. 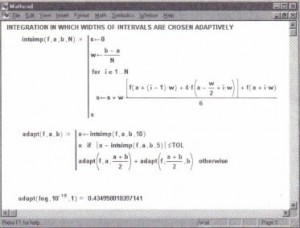 Using a subroutine to manage complexity,

Recursion is a powerful programming technique that involves defining a function in terms of itself as shown in Figure 18-14, Recursive function definitions should always have at least two parts:

The idea is similar to that underlying mathematical induction: if you can get fen + 1) from f(n), and you know f(O) , then you know all there is to know about Keep in mind, however, that recursive function definitions, despite their elegance and conciseness, are not always the most computationally efficient definitions. You may find that an equivalent definition using one of the iterative loops described earlier will evaluate more quickly 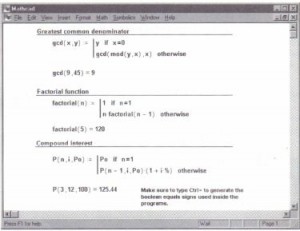 The following simple program substitutes one expression for another and returns a simplified symbolic result:

• Click the button labeled “Add Line” on the Programming Palette

Click outside the expression to see the simplified result

Only one of the variables in this example, x, is defined locally in the program, but Mathcad understands the other variables, a and y, as symbols and substitutes a for x in the expression it returns

Programs that include the return and on error statements cannot be evaluated symbolically since the symbolic processor does not recognize these operators. 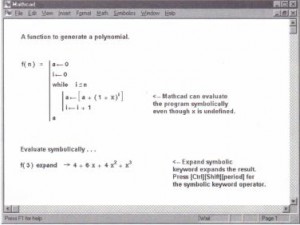 Using a Mathcad program to generate a symbolic expression.