A range variable is a variable that takes on a range of values each time you use it. This chapter describes range variables and shows how to use them to perform iterative calculations, display tables of numbers, and facilitate the entry of many data values into a table.

The following sections make up this chapter.

variable.
Output tables
How to display a table of numbers.

Iterative calculations
How to perform iteration with one or two range variables.

Seeded iteration
How to perform iteration when values in one step depend on the values in the previous step. Recursive techniques such as this provide the foundation for solving difference equations with Mathcad.
Vector or subscript notation
When to use the “vectorize” operator rather than subscripts.

Range variables are crucial to exploiting Mathcad’s capabilities to their fullest. This section shows how to define and use range variables to perform iteration. For a
description of more advanced iterative operations made possible by the programming operators in Mathcad Professional, turn to Chapter 18, “Programming.”

To define a range variable, type the variable name followed by a colon and a range of values. For example, here’s how to define the variable} ranging from 0 to 15

This definition indicates that} now takes on the values 0,1,2 … 15. To define a range
variable that changes in steps other than 1, see the section “Types of ranges” on page 216.

You must define a range variable exactly as shown above. There must be:

In particular, you cannot define a variable in terms of a range variable. For example, if after having defined} as shown you now define i=i + 1 , Mathcad assumes you are trying to set a scalar variable equal to a range variable and marks the equation with an appropriate error message.

One application of range variables is to fill up the elements of a vector or matrix. You can define vector elements by using a range variable as a subscript. For example, to define Xj for each value of}:

Figure 11-1 shows the vector of values computed by this equation. Since} is a range variable, the entire equation is evaluated once for each value of}. This defines Xj for each value of} from 0 to 15. The effect is exactly the same as if you had typed 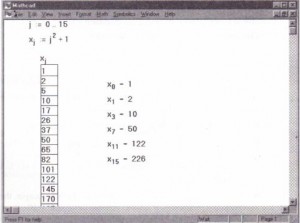 Using a range variable to define the values of the vector x.

To understand how Mathcad computes with range variables, keep in mind this fundamental principle:

If you use two or more range variables in an equation, Mathcad evaluates the equation once for each value of each range variable. The section “Iterative calculations” on page 222 discusses this in more detail.

Mathcad takes longer to compute equations with ranged expressions since there are many computations for each equation. While Mathcad is computing, the mouse pointer changes its appearance. To learn how to interrupt a calculation in progress, see the section “Interrupting calculations” on page 146.

The definition ofj in the previous section, ranging from 0 to 15, is the simplest type of range definition. Mathcad permits range variables with values ranging from any value to any other value, using any constant increment or decrement.

To define an arbitrary range variable, type an equation of this form:

This appears in your document window as

In this range definition:

• The variable k is the name of the range variable itself. It must be a simple name. No subscripts or function definitions are allowed.
• The number 1 is the first value taken by the range variable k.
• The number 1.1 is the second value in the range. Note that this is not the step size. The step size in this example is 0.1, the difference between 1.1 and 1. If you omit the comma and the 1.1, Mathcad assumes a step size of one in whatever direction (up or down) is appropriate.
• The number 2 is the last value in the range. In this example, the range values are constantly increasing. If instead you had defined k := 10 .. 1 , then k would count down from 10 to 1. Even if the third number in the range definition is not an even number of increments from the starting value, the range will not go beyond it. For example, if you define k := 10, 20 .. 65 will take values 10, 20, 30 … 60. 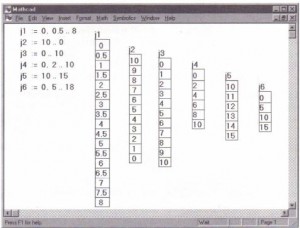 Some valid definitions for range variables.

Note that if you use a fractional increment for a range variable, you will not be able to use that range variable as a subscript. This is because subscripts must be integers.