Mathcad includes a number of functions for performing regression. Typically, these functions generate a curve or surface of a specified type which in some sense minimizes the error between itself and the data you supply. The functions differ primarily in the type of curve or surface they use to fit the data.

Unlike the smoothing functions in the next section, the end result of a regression is an actual function, one that can be evaluated at points in between the points you supply. Whenever you use arrays in any of the functions described in this section, be sure that every element in the array contains a data value. Since every element in a array must have a value, Mathcad assigns 0 to any elements you have not explicitly assigned.

These functions return the slope and intercept of the line that best fits your data in a least-squares sense. If you place your x values in the vector vx and your sampled y values in vy, that line is given by 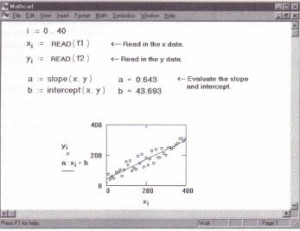 These functions are useful when you have set of measured y values corresponding to x values and you want to fit a polynomial through those y values.

Use regress when you want to use a single polynomial to fit all your data values. The regress function lets you fit a polynomial of any order. However as a practical matter, you would rarely need to go beyond n = 4.

Since regress tries to accommodate all your data points using a single polynomial, it will not work well when your data does not behave like a single polynomial. For example, suppose you expect your y i to be linear from xl to x 10 and to behave like a cubic equation from Xli to x20. If you use regress with n = 3 (a cubic), you may get a good fit for the second half but a terrible fit for the first half.

The loess function, available in Mathcad Professional, alleviates these kinds of problems by performing a more localized regression. Instead of generating a single polynomial the way regress does, loess generates a different second order polynomial depending on where you are on the curve. It does this by examining the data in a small neighborhood of the point you’re interested in. The argument span controls the size of this neighborhood. As span gets larger, loess becomes equivalent to regress with n = 2. A good default value is span = 0.75. .

Returns the interpolated y value corresponding to the x. The vector vs comes from evaluating loess or regress using the data matrices vx and vy. 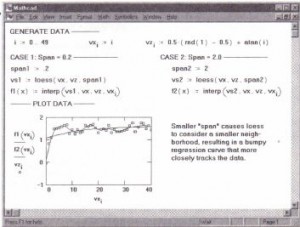 Effect of different spans on the loess function. Note that since

The loess and regress functions discussed in the previous section are also useful when you have set of measured z values corresponding to x and y values and you want to fit a polynomial surface through those z values.

The properties of these functions are described in the previous section. When using these functions to fit z values corresponding to two independent variables x and y, the meanings of the arguments must be generalized. Specifically:

• The argument vx which was an m-element vector of x values becomes an m-row and 2 column array, Mxy. Each row of Mxy contains an x in the first column and a corresponding y value in the second column.

• The argument x for the interp function becomes a 2-element vector v whose elements are the x and y values at which you want to evaluate the polynomial surface representing the best fit to the data points in Mxy and vz.

Keep in mind that for regress, the number of data values, m must satisfy

The linfit function is designed to solve these kinds of problems. If you believe your data could be modeled by a linear combination of arbitrary functions:

Anything you can do with linfit you can also do, albeit less conveniently, with genfit. The difference between these two functions is the difference between solving a system of linear equations and solving a system of nonlinear equations. The former is easily done using the methods of linear algebra. The latter is far more difficult and generally must be solved by iteration. This explains why genfit needs a vector of guess values as an argument and linfit does not.

Figure 14-12 shows an example in which genfit is used to find the exponent that bes fits a set of data. 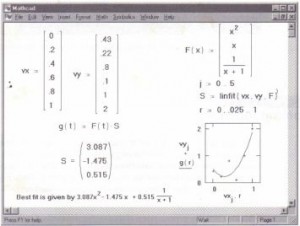 Using linfit to find coefficients for a linear combination of 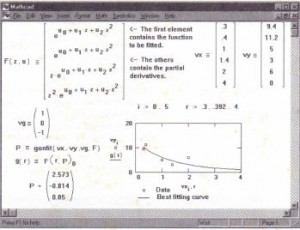 Using genfit for finding the parameters of afunction so that it
best fits the data .

Whenever you use vectors in any of the functions described in this section, be sure that every element in the vector contains a data value. Since every element in a vector must have a value, Mathcad assigns 0 to any elements you have not explicitly assigned. The medsmooth function is the most robust of the three since it is least likely to be affected by spurious data points. This function uses a running median smoother, computes the residuals, smooths the residuals the same way, and adds these two smoothed vectors together. The details are as follows:

• Evaluation of medsmooth(vy, n) begins with the running median of the input vector vy. We’ll call this vy’ . The ith element is given by:

The ksmooth function in Mathcad Professional uses a Gaussian kernel to compute local weighted averages of the input vector vy. This smoother is most useful when your data band of relatively constant width. If your data lies scattered along a band whose width fluctuates considerably, you should use an adaptive smoother like supsmooth, also available in Mathcad Professional.

and b is a bandwidth which you supply to the ksmooth function. The bandwidth is usually set to a few times the spacing between data points on the x axis depending on how big a window you want to use when smoothing.

The supsmooth function uses a symmetric k nearest neighbor linear least-squares fitting procedure to make a series ofline segments through your data. Unlike ksmooth which uses a fixed bandwidth for all your data, supsmooth will adaptively choose different bandwidths for different portions of your data. 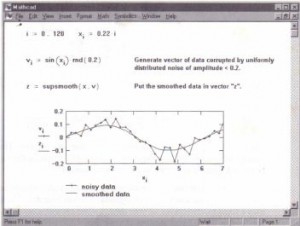