To start scripting an object:

You’ll see a new window called the Script Editor containing three subroutine stubs in which you insert your own scripting code. Figure 19-6 shows a portion of the completed VB Script script for an object called SmileyEvent. 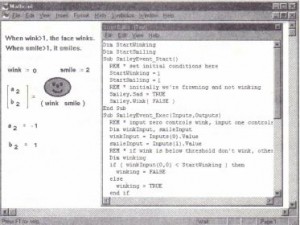 A scripted object. The Script Editor window shows a portion of

The script you write will usually contain at a minimum the following three subroutines:

• A starting routine, called once when execution of the component begins. This is a good place to initialize variables, open files for reading and writing, etc.

• An execution routine that by default takes as arguments the collections Inputs and Outputs.

• A stopping routine, called once when execution of the component stops.

The commands in each section are executed in sequence whenever the Mathcad worksheet is calculated. What you will include in these subroutines is determined largely by the properties of the OLE object you are scripting; consult the documentation for the server or control.

Choose Close & Return from the Script Editor’s File menu when you have completed your script and want to resume working in the Mathcad worksheet.

If the data file you want to import or export to is a plain ASCII file, you can use components for importing and exporting data as described in the first three sections of this chapter. Alternatively, you can use Mathcad’s built-in functions for reading plain ASCII data files. These built-in functions are provided mainly for compatibility with worksheets created in earlier versions of Mathcad, but you can use them in a Mathcad 7 worksheet if you like

Files in plain ASCII format consist only of numbers separated by commas, spaces, or carriage returns. The following are some examples of files that the built-in functions can read, assuming the data are in ASCII format:

• A file containing experimental data captured with data-acquisition hardware and software.
• A file created by printing from a spreadsheet program to the disk.
• A column of numbers typed into a word processor and saved in plain ASCII format.
• Output from a BASIC program.
• Data downloaded from a mainframe database.

The argument you supply to any Mathcad file access function described in this section is a string expression-or a variable to which a string is assigned-that corresponds either to:

• the name of a data file in the working directory of the Mathcad worksheet you’re currently working on; or
• a full or relative path to a data file located elsewhere on a local or network file system.

As described in  “Variables and Constants,” a string in Mathcad is a special kind of math expression that always appears between double quotes, and you start a string expression in an empty math placeholder by typing the double-quote (,,) key.

See the section “Strings” in Chapter 8 for more information about creating and editing strings. For examples of how to use string expressions as arguments to data file access functions, see Figure 19-7 though Figure 19-13

Mathcad includes six functions for accessing numerical data stored in ASCII data files: READ, WRITE, APPEND, READPRN, WRITEPRN, and APPENDPRN. They each take as an argument a string expression as described above.

These functions have the following properties

• You must type the function name all in uppercase. Alternatively, you may insert the function into your document by choosing Function from the Insert menu and double-clicking on the function name.
• If Mathcad cannot find a data file, it marks the file-access function with an error message indicating that it could not find the file you specified. If Mathcad tries to read a file and the format is incorrect, it marks the function with an error message.
• The WRITE, APPEND, WRITEPRN, and APPENDPRN functions must appear alone on the left side of a definition.
• Each new equation reopens the data file. When you read data, for example, each new equation starts reading at the beginning of the file. 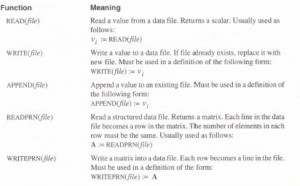 This section discusses how to use READ, WRITE, and APPEND to read and write data in unstructured files: files containing numbers, but not necessarily in rows and columns. 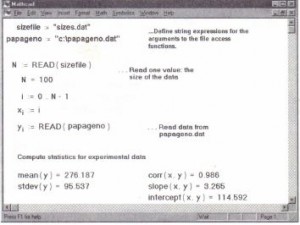 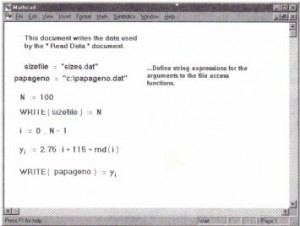 Writing data with the WRITE function.

When Mathcad writes data to a file, it separates successive numbers with spaces.

Mathcad also inserts line breaks to keep the lines shorter than 80 characters. When you use WRITE, all values are saved to the file with maximum precision, regardless of the global format of the document.

Mathcad ignores units when it writes data to a data file.

This section discusses how to use READPRN, WRITEPRN, and APPENDPRN to read and write data in structured files. A structured data file is a data file with a fixed number of values per line. For example, if you print a rectangular area from a spreadsheet into a file, the resulting rows and columns of numbers will be a structured file.

Suppose you have an ASCII text file containing the data shown below. These numbers could come from a spreadsheet or from any other source. 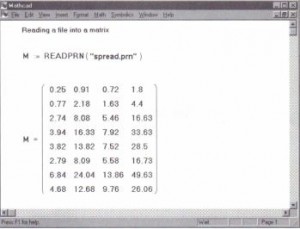 Reading spreadsheet data into a matrix

The READPRN function reads the entire data file, determines the number of rows and columns, and creates a matrix out of the data

When Mathcad reads data with the READPRN function:

• The result of reading the data file is an m-by-n matrix, where m is the number of lines containing data in the file and n is the number of values per line. To define a matrix out of the numbers in a data file, type an equation like M := READPRN( ” file. prn “). Do not use subscripts on M. READPRN returns a matrix, so no subscripts are necessary. 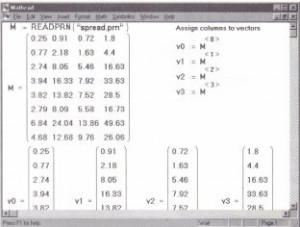 Assigning a variable to each column of data from a data file. 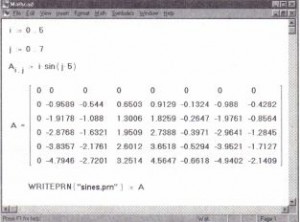 Unlike the WRITE function, the WRITEPRNfunction writes out the data in columns. The precision of the data written out and column widths are controlled by PRNPRECISION and PRNCOLWIDTH which you can set by choosing Options from the Math menu and clicking on the Built-in Variables tab. In the example above, note that since the PRNPRECISION is set to four, the numbers are written to four decimal places. Since PRNCOLWIDTH is set to eight, each column has space for eight characters. Since PRNPRECISJON and PRNCOLWIDTH can be varied independently, you must take care to choose them in such a way that the column width can accommodate all the digits, together with a space to separate the columns.

If the array you are writing is either a nested array (an array whose elements are themselves arrays) or a complex array (an array whose elements are complex) then WRITEPRN will not create a simple ASCII file. Instead, WRITEPRN creates a file using a special format unlikely to be readable by other applications. This file can, however, be read by Mathcad’s READPRN function. 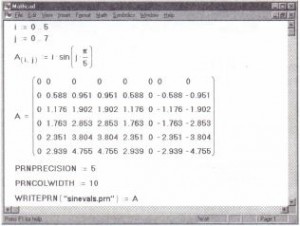 document that creates a data file with columns 10 characters

Advantages of using READPRN and WRITEPRN
Exchanging data with other applications