Mathcad sets the upper and lower radial axis limits by default. For a linear scale, the upper limit is the maximum radial value of whatever is plotted. The lower limit is zero. For a logarithmic scale, the upper limit is set to the next higher integer power of ten above the maximum of the data. The lower limit on a logarithmic scale is set to the next integer power of ten below the minimum of the data.

You may want to use axis limits other than those set by Mathcad. You can override Mathcad’s limits by entering limits directly on the graph. To do so:
• Click in the polar plot to select it. Mathcad shows two additional numbers on the upper right of the polar plot. These numbers are enclosed within corner symbols, asfllustrated by the selected plot in Figure 21-4, below.
• Mathcad treats a negative radial limit as a positive value. To set the maximum value of the radial axis, click on the number in the top placeholder and type in a new number. While there’s rarely a reason to change the minimum value, you can do this by clicking on the lower number and typing a new number.
• Click outside the plot, Mathcad immediately redraws it using the axis limits you specify. Figure 21-4 shows the effect of manually setting limits on a polar plot. 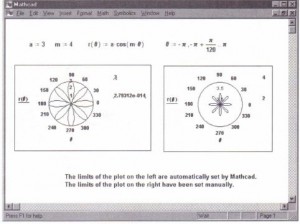 Mathcad places linearly or logarithmically spaced radial grid lines on a polar plot. The spaces between grid lines are relatively round numbers that span the range of values on the angular axis. There may, however, be occasions when you need to place a radial line somewhere other than where Mathcad would normally place a grid line. To add a radial reference line to the polar plot:
• Click in the polar plot to select it.
• Choose Graph-ePolar Plot from the Format menu or double-click on the plot to display the dialog box for formatting polar plots. If necessary, click on the Polar  Axes page.
• Click the Show Markers check box in the radial axis column to add a check. Click “OK”. Mathcad shows two additional placeholders on the upper-left side ofthe plot.
• Click on one of the placeholders and type in the value at which you want the radial reference line drawn. Repeat this process with the other placeholder to add two radial reference lines.
When you click outside the graph, Mathcad draws a dashed circle at each number that you specified. The number that you typed appears on this dashed circle. To move the dashed circle, click on the appropriate number and change it. To delete the circle, delete this number or click on the Show Markers check box to remove the check. illustrates the use of radial reference lines. 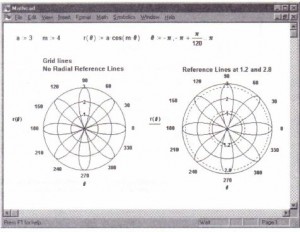 Graphing more than one expression
Using the Symbolics menu