Most built-in functions and operators do not make sense when used with strings and will issue error messages if you use string arguments with them. Mathcad Professional, however, includes several specialized functions for working with strings.

The strings used and returned by most of the functions described below are typed in a math placeholder by pressing the double-quote key (n) in a placeholder and entering any combination ofletters, numbers, or other ASCII characters. Mathcad automatically places double quotes around the string expression, and will display quotes around a string whenever one is returned as a result.

See Chapter 8, “Variables and Constants,” for more information on strings.

The following four functions are useful for combining strings, determining the length of a string, and locating and returning substrings.

When evaluating the functions search and substr, Mathcad assumes that the first character in a string is at position O

Converting to and from strings

Use num2str and str2num to convert between numeric values and strings. These functions are useful when it is more convenient to manipulate a number as a string rather than mathematically, or when you need to perform numerical calculations on a string of numbers.

Just as Mathcad’ s built-in error messages appear as “error tips” when a built-in function is used incorrectly or could not return a result, you may want specialized error messages to appear when your user-defined functions are used improperly or cannot return answers.

Mathcad allows you to define your own error messages using the string function error. This function is especially useful for trapping erroneous inputs to Mathcad programs you write. See Chapter 18, “Programming,” for details on using error in programs.

Returns the string S as an error message. 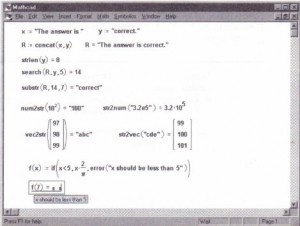 Using string functions to manipulate strings, convert to and from
strings, and define error messages.