To solve a system of first order differential equations:

The rkfixed function will return a matrix whose first column contains the points at which the solutions are evaluated and whose remaining columns contain the solution functions evaluated at the corresponding point, Figure 16-5 shows an example solving the equations: 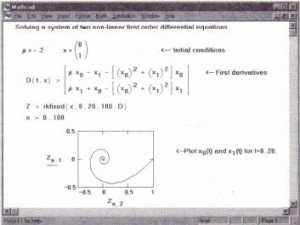 The main differences are:

• The vector-valued function must contain expressions for the n – 1 derivatives of each unknown function in addition to the nth derivative. 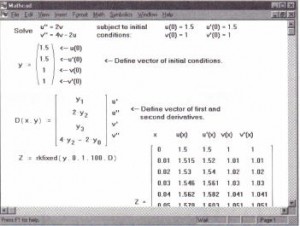 The function rkfixed returns a matrix in which:

• The first column contains the values at which the solutions and their derivatives are to be evaluated.

• Your system of differential equations may have certain properties which are best exploited by functions other than rkfixed. The system may be stiff (Stif.fb, Stiffr); the functions could be smooth (Bulstoer) or slowly varying (Rkadapt).

• You may have a boundary value rather than an initial value problem (sbval and bvalfit).

Given a fixed number of points, you can approximate a function more accurately if you evaluate it frequently wherever it’s changing fast and infrequently wherever it’s changing more slowly. If you know that the solution has this property, you may be better off using Rkadapt. Unlike rkfixed which evaluates a solution at equally spaced intervals, Rkadapt examines how fast the solution is changing and adapts its step size accordingly.

This “adaptive step size control” enables Rkadapt to focus on those parts of the integration domain where the function is rapidly changing rather than wasting time integrating a function where it isn’t changing all that rapidly.

Note that although Rkadapt will use nonuniform step sizes internally when it solves the differential equation, it will nevertheless return the solution at equally spaced points. Rkadapt takes the same arguments as rkfixed. The matrix returned by Rkadapt is identical in form to that returned by rkfixed.

Evaluating only the final value

The differential equation functions discussed so far presuppose that you’re interested in seeing the solution y(x) over a number of uniformly spaced x values in the integration interval bounded by xl and x2. There may be times, however, when all you want is the value of the solution at the endpoint, y(x2). Although the functions discussed so far will certainly give you y(x2), they also do a lot of unnecessary work returning intermediate values of y(x) in which you have no interest.

If you’re only interested in the value of y(x2) , use the functions listed below. Each function corresponds to one of those already discussed. The properties of each of these functions are identical to those of the corresponding function in the previous sections

So far, all the functions discussed in this chapter assume that you know the value taken by the solutions and their derivatives at the beginning of the interval of integration. In other words, these functions are useful for solving initial value problems.

In many cases, however, you may know the value taken by the solution at the endpoints of the interval of integration. A good example is a stretched string constrained at both ends. Problems such as this are referred to as boundary value problems. The first section

Names
A note about function definitions