To create a vector field plot:
• Create a matrix as described above.
• Choose Graph-» Vector Field Plot from the Insert menu. Mathcad shows a box with a single placeholder as shown below: 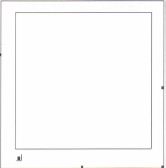 • Type the name of the matrix in the placeholder.

What you’ll see is a collection of m . n vectors as shown in Figure 26-1. The base of each vector sits on the x and y values corresponding to its row and column. The magnitude and direction of each vector are derived from the real and imaginary parts of the matrix element. 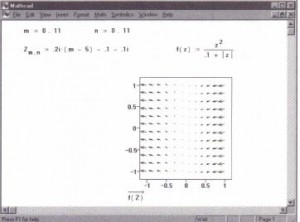 A sample vector plot from a complex matrix.

You can also create a vector field plot by using two matrices of real numbers rather than a single matrix of complex members. The two matrices must have the same number of rews and columns. The first matrix should have the x components of the vectors; the second should have the y components. Figure 26-2 shows the same vector field as that shown in Figure 26-1, but it is plotted using two real matrices rather than a single complex matrix. 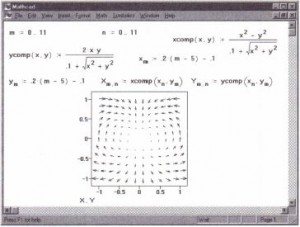 A sample vector plot from two matrices of real numbers.

To change the size of a vector field plot, follow these steps:
• Click in the vector field plot to select it.
• Move the mouse pointer to one of the three handles along the edge of the plot. The pointer will change to a double-headed arrow

Press and hold down the mouse button. While holding down the button, move the mouse. The plot will stretch in the direction of motion.
• Once the plot is the right size, let go of the mouse button.
• Click outside the vector field plot to deselect